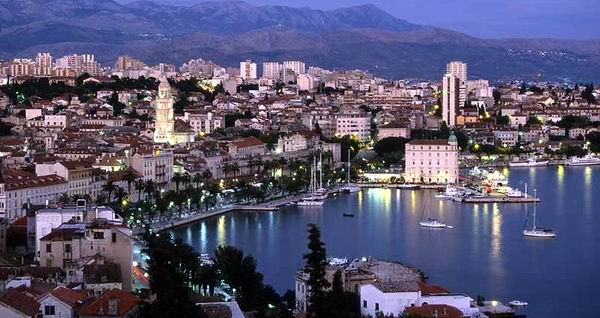 SPLIT –
Because of its Mediterranean charm and delightful historical monuments, many people call Split "the most beautiful town in the world".  It is also the jumping-off point for exploration of the coast and islands of the beautiful Adriatic coast. That ever young city with the population of abut 250,000 people that give it it's warm Mediterranean temper, has lived it's urban rhythm for as long as 1700 years, with it's heart in the Diocletian's Palace and it's soul widespread to embrace you. Ever since the life of the city protected by the UNESCO and entered into the register of the World Cultural Haritage has been writing the history of this unique capital of Dalmatia. The importance of Diocletian's Palace far transcends local significance because of its level of preservation and the buildings of succeeding historical periods built within its walls,  which today form the very heart of old Split. Many of Split's historical and cultural buildings can be found within the walls of   Diocletian's Palace. Split is not only the cultural, economic and traffic center of Central Dalmatia with road and sea connections to Dalmatia's numerous destinations but it is itself often a tourist and excursionist destination. Split is a busy port, with an international airport and regular ferry services with the nearby islands, the north and south Adriatic, Italy and Greece. The fertile fields around Split represent a good base for agriculture, while cultural monuments, superb landscapes and unparalleled seascapes make it a tourist's wonderland. 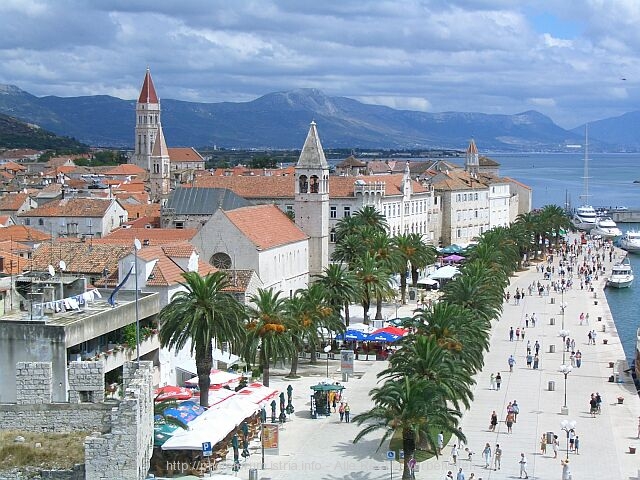 TROGIR – Visit UNESCO's city, a pearl of the Adriatic, and experience the spirit of the past. Trogir is a town-museum in the very meaning of the word. It is a bustling Mediterranean town, with exuberant sunshine and a warm landward breeze. Despite the modern rhythm of life, it has conserved the intimacy of space, of human relations, and the attractiveness of old-fashioned taverns which irresistibly entice with their colours and scents. The unique historical core, Radovan's portal, the art collections which have been arousing excitement among visitors and travellers for centuries offer a tourist beauty, personified in the relief of Kairos. The wider surroundings of Trogir is characterized by lavish green  vegetation, numerous islands and islets, rocky and pebble beaches. The old core is situated on a small island between the 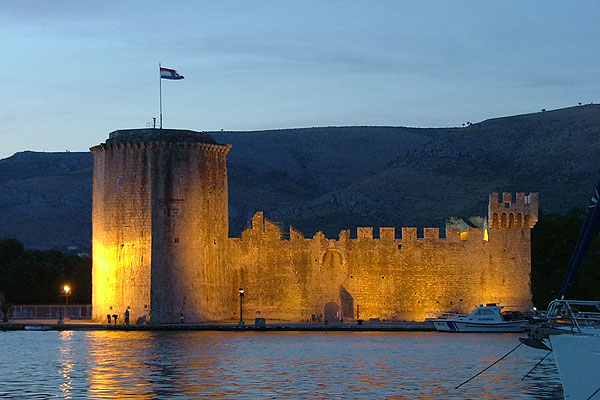 island of Ciovo and the mainland; connected with the mainland by a small stone bridge, and with the island of Ciovo by a  drawbridge. The town spreads to the northern coast of Ciovo, opposite the small island. Trogir is one of the three most visited nautical destinations between Rovinj and Dubrovnik.  Upon entering the Trogir port, you will be approach the magnificent and breathtaking Kamerlengo medieval tower, which represents the beauty of the antique monuments this city museum has to offer! 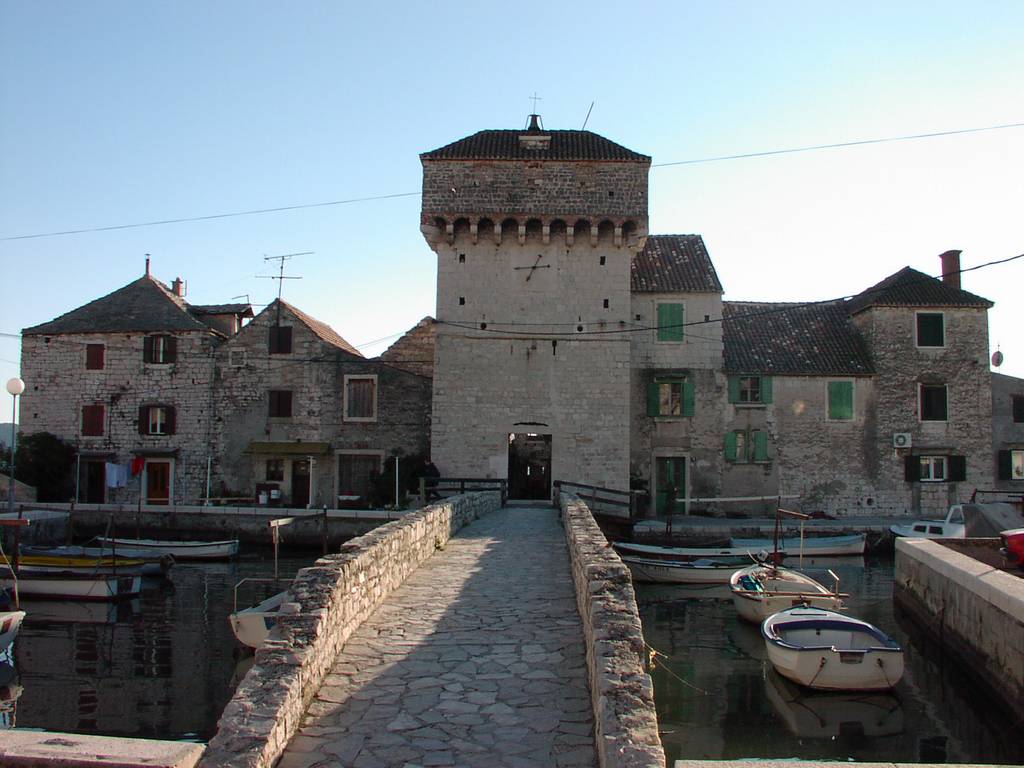 KAŠTELA – Seven nice old places, seven citadels are an integral part of the tourist area between Split and Trogir. This region has been attracting people since ancient times to present. Three picturesque places – Kaštel Štafilić, Kaštel Novi and Kaštel Stari are located along the 6 km long cost of the Kaštela Riviera. They are one of favourite destinations of domestic and foreign tourists. Kaštel Lukšić is a tourist resort in the central part of the Kaštela Gulf, famous for the botanical garden with Mediterranean vegetation, as well as for nice pebble beaches.The attractions of Kaštel Kambelovac include nice beaches, numerous restaurants, a beautiful seaside promenade and the nearby hill Kozjak. Kaštel Gomilica has nice sand beaches, suitable for children. The whole bay of Kastela is placed in the bottom of Kozjak, Kozjak is a hill about 700 m high. Kastela stretches over 17 km. On the beginning of Kastela (the side nearer to Split) there is an industrial zone with a cement factory, steel mill and some other factories. On the end of Kastela there is an agricultural region, olives, grapes and cherries are grown there. There are also many greenhouses in the area. Split`s airport is situated in the west part of Kastela. 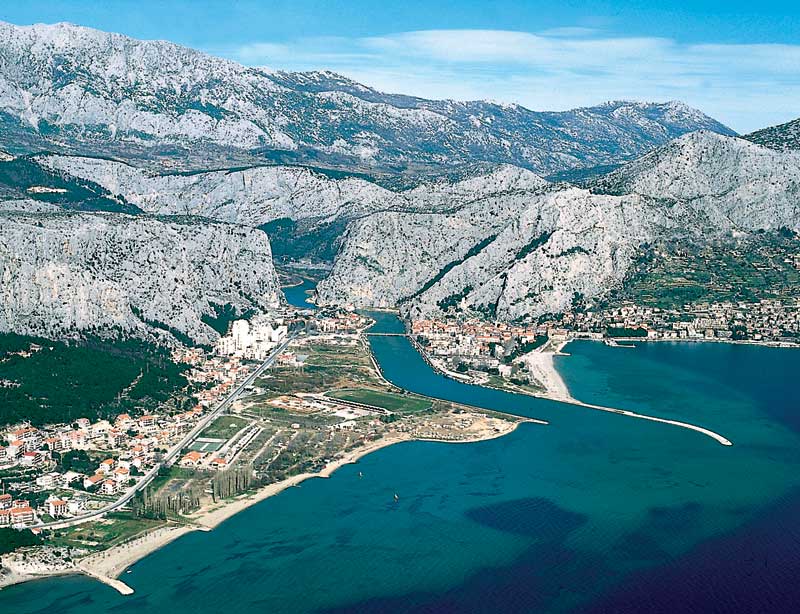 OMIŠ – Omiš is a small Central Dalmatian town and harbour located between Split and Makarska, situated in the mouth of the Cetina river, surrounded with massive gorges. In the past Omis was notorious becuse of the pirates of Omis whose ships were a centuries-long symbol of retaliation, courage and strength. Ancient town of Omiš, Omiš churches and Omiš fortresses are silent stone reminders of the power and the might of infamous Omiš pirates. Numerous beaches and bays, rich vegetation, fresh air and crystal blue sea make Omiš Riviera the perfect place to ecsape the stress and rush of modern life. Due to it's location in the heart of the Dalmatia, Omiš is the perfect place to start the exploration of Dalmatia, it's islands, it's proud history, cultural heritage and natural beauties. Omiš is literally filled with restaurants, wine-cellars and caffe bars. Mediterranean cuisine, with it's olive oil, fish and sea food, home-grown vegetables, wine, and it's thousands year tradition will surelly help you experience the true spirit of the Mediterranean. Omiš Cultural Summer, Festival of Dalmatian Klapas, Pirates Nights and many other musical, theatrical and gastronomical social events make Omiš perfect place to experience not only the beauty of Dalmatia, but also beauty of it's soul. 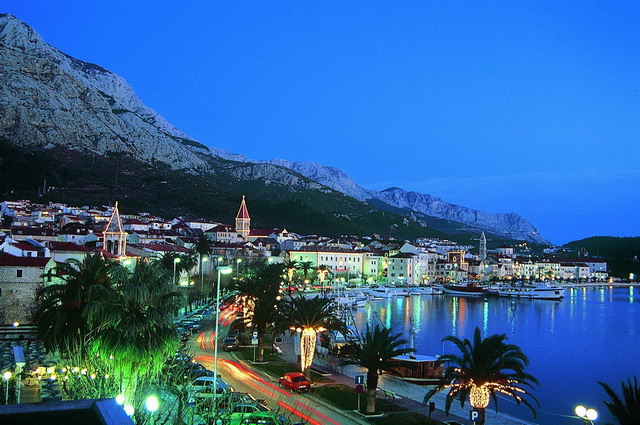 MAKARSKA – Makarska has always been the center of the surrounding region known as Makarska Riviera, both in an administrative, political and economic sense, as well as a center of culture, education, and since the mid twentieth century, tourism. Today, it is a city of more than 15 thousand inhabitants that encompasses picturesque villages at the foot of the Biokovo Mountain which protects it from the harsh continental climate and is responsible for its rich Mediterranean vegetation, mild winters, long, warm summers cooled by a refreshing breeze called maestral. Makarska is one of the most famous tourist destinations on the Croatian coast, attractive for it's nature and good climate, rich in tourist attractions and full of hospitable hosts. To this day, Makarska is known for its sandy beach, which is almost 2 kilometers long. The walkways are lined  with pine trees and surrounded by luxury hotels, tourist facilities, and gastronomical havens, and there is plenty of fun for both adults and children. Center of Makarska is an old town with narrow stone-paved streets, a main church square 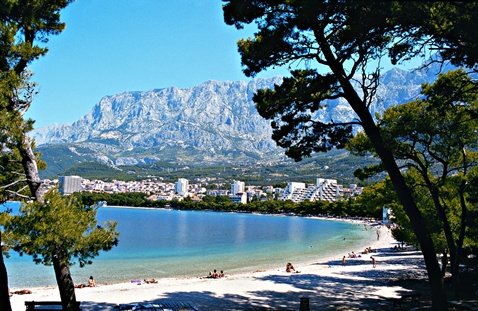 where there is a flower and fruit market, and a Franciscan monastery that houses a sea shell collection featuring a giant clam  shell. The city of Makarska grew around a natural harbor protected by a picturesque peninsula of Sveti Petar (St. Peter) and the cape Osejava. It is the only harbor of this kind between the mouth of the Cetina and Neretva rivers. In the past it provided protection and safe harbor during stormy weather to sailors, pirates and merchants, and nowadays it does the same for yachts, sailing boats and tourist ships.
SPLIT ISLANDS 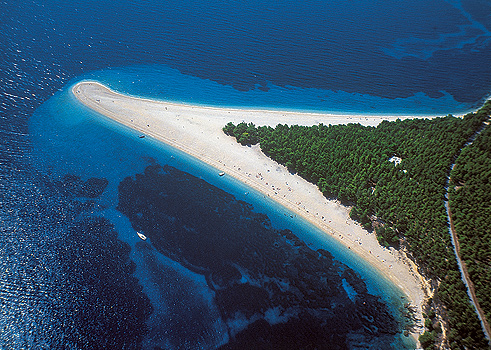 BRAČ - Island Brač is the third largest island of Croatia. It's highest peak Vidova Gora, 778m above the sea level, is also the highest peak of all the Croatian islands. The limestone part of the coast is rocky and steep, while the rest is rather low and sandy.  Sailing on the southern side one needs to visit Bol, with famous Golden Cape – Zlatni Rat – Beach. The beach is located on a cape covered in pebbles which moves, depending on the wind and waves from one side to another. You'll have to admit that this is the only beach that you've heard of that changes it's shape from day to day. Island of Brač is also known for the quarries, which have been a source of stone for building decorative stonework for centuries, most famous being The White house in Washington. 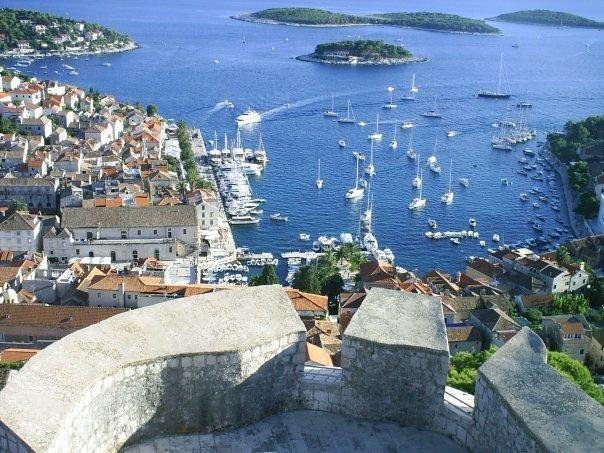 HVAR - The city of Hvar is a unique fusion of luxurious Mediterranean nature, rich cultural and historical heritage, and mundane, tourist present. It is situated in picturesque nature, facing the southern, side of the world that has given it all Mediterranean attraction and cheerfulness; facing sea, that gave it splendid and repeatable history, Hvar is an inexhaustible treasury of the scenery, atmosphere and adventure. Hvar gained glory and power during middle ages being an important port within the Venetian, naval empire. On the island of Hvar one can enjoy the vast fields of lavender, ancient olive trees and vineyards, in immaculate harmony between man and nature. Today, it is centre of island’s tourism, one of the favourite destinations in Dalmatian riviera and it is considered to be one of the 10 most beautiful islands in the world. Whatever you are looking for on your vacation, you may find it here; night life and cultural attractions of cosmopolitan Hvar town, sailing thru archipelago of Pakleni Islands, the ancient town Stari Grad, heavenly beaches under pine trees in Zavala, exotic atmosphere of south cliffs in Ivan Dolac, Sveta Nedilja or Milna, the "little Venice" ambient in Vrboska...this is just a fraction of it ... take a yacht if your choice and sail away to Hvar. 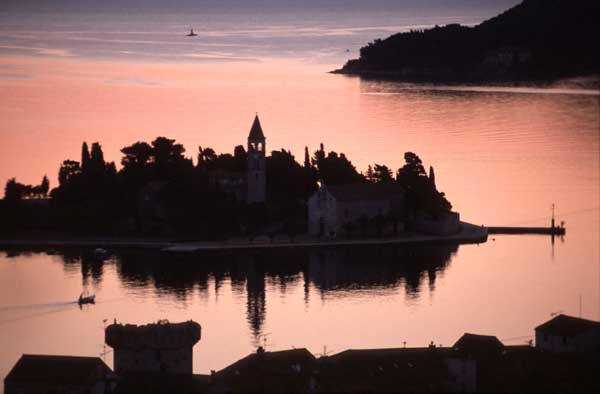 VIS - Vis was strategically significant in the Adriatic and was fought over in many naval battles. After the Second world war Vis became a military base to which access was strictly controlled and it was only in summer 1998 that the island opened to foreign visitors. This protection from tourist development left the island unspoilt and the local population able to carry on their traditional way of life - fishing and farming. The island of Vis is not the type of fashionable place or keeping company and attending events until deep into the night. It is a place for a relaxing holiday in the sun, for a visit to the entire island or to the islets 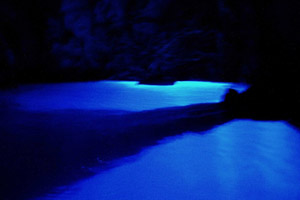 and cliffs dispersed around the archipelago or perhaps to practice various sports... Beautiful beaches, preserved nature, ecological agriculture and preserved traditional architecture are unique advantages of this unique island. After all, you can keep company with the delights from the menu, with the famous locally produced wines accompanied by some excellent concert music. Vis has for centuries been famous also for it's wine and fish dishes. If we add to this unique historical, cultural, and natural heritage the beautiful crystal clear sea, stunning hidden beaches, bays and islands it is clear why Vis is the favorite tourist destination for those visitors who want to try the unique and almost gone authentic Mediterranean environment and way of life. Worth visiting with your yacht between 11 – 13 o’clock, is the nearby island of Biševo famous for it's Blue Grotto locally called Modra Špilja, sea cave discovered in 1886 , approachable only by boat. 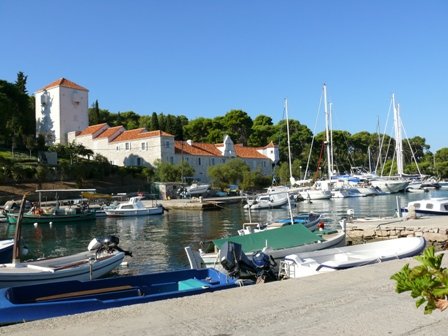 ŠOLTA – In an azure shell of the sea and the sky by a miracle of tectonic natural forces, from the silent blue Adriatic Sea the island of Šolta in it's magnificent beauty was born. Šolta was a real island of fishermen, but also of land workers and especially of olive and wine growers. Although life on Šolta was very hard, the poor karst soil and the hard work has created kind people with an open heart and specialties such as virgin olive oil and astringent wine from Šolta alongside the many fishing songs at the break of each new day. Restless and spiteful outlines of the island, it's beauty and healing healthy climate promise a complete peace and pleasant moments in harmony with nature. Although just an hour by sailing yacht from Split, Šolta's natural environment, it's complete peace and silence, have remained untouched with it's 24 bays and 4 ports that can take more than thousand small yachts. Šolta is an inevitable sailing destination. Did you know that old Romans used donkeys as help in building roads? They would let it in front of them knowing that it is so lazy that it would surely find the shortest and the easiest way. One of the remain families of this endangered species found their place on the island of Šolata. Feel free to pay them a visit, leaving your yacht in the naturally protected Šolta’s bay.