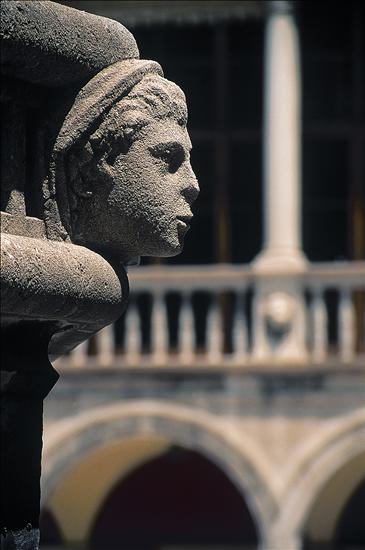 ŠIBENIK – Šibenik lies almost in the middle of the Croatian Adriatic Coast, in the picturesque and indented bay around the mouth of the river Krka, one of the most beautiful Karst rivers in Croatia. Town it self is famous for its UNESCO protected Cathedral of St. James (Sv. Jakov), medieval fortresses and especially for its two national parks: Krka waterfalls and Kornati archipelago chosen to be worlds no 1. sailing destination by National Geographic journalists. The county of Šibenik has 242 islands, islets and rocks. Most of this archipelago lies in the north-west part of Šibenik's waters and is very indented, bare and sparsely inhabited. The county of Šibenik has only 10 island settlements. The most numerous group of islands are the Kornati, widely known for their bizarre shapes and luxurious and magnificent landscapes. From Šibenik bay the open sea and the islands are reached through a narrow winding channel about 10 kilometers long and 300 - 1200 meters wide. Sailing in twilight in order to listen to music in one of the old fortresses of the city is a special experience. This region is characterized by limestone mountain crests, small valleys and plateaus - the bases of agriculture. The vegetation is mostly spruce in the hinterland, and macchia on the coast and islands. The Šibenik region has a Mediterranean climate with hot summers cooled by the maestral breeze, and dry winters. 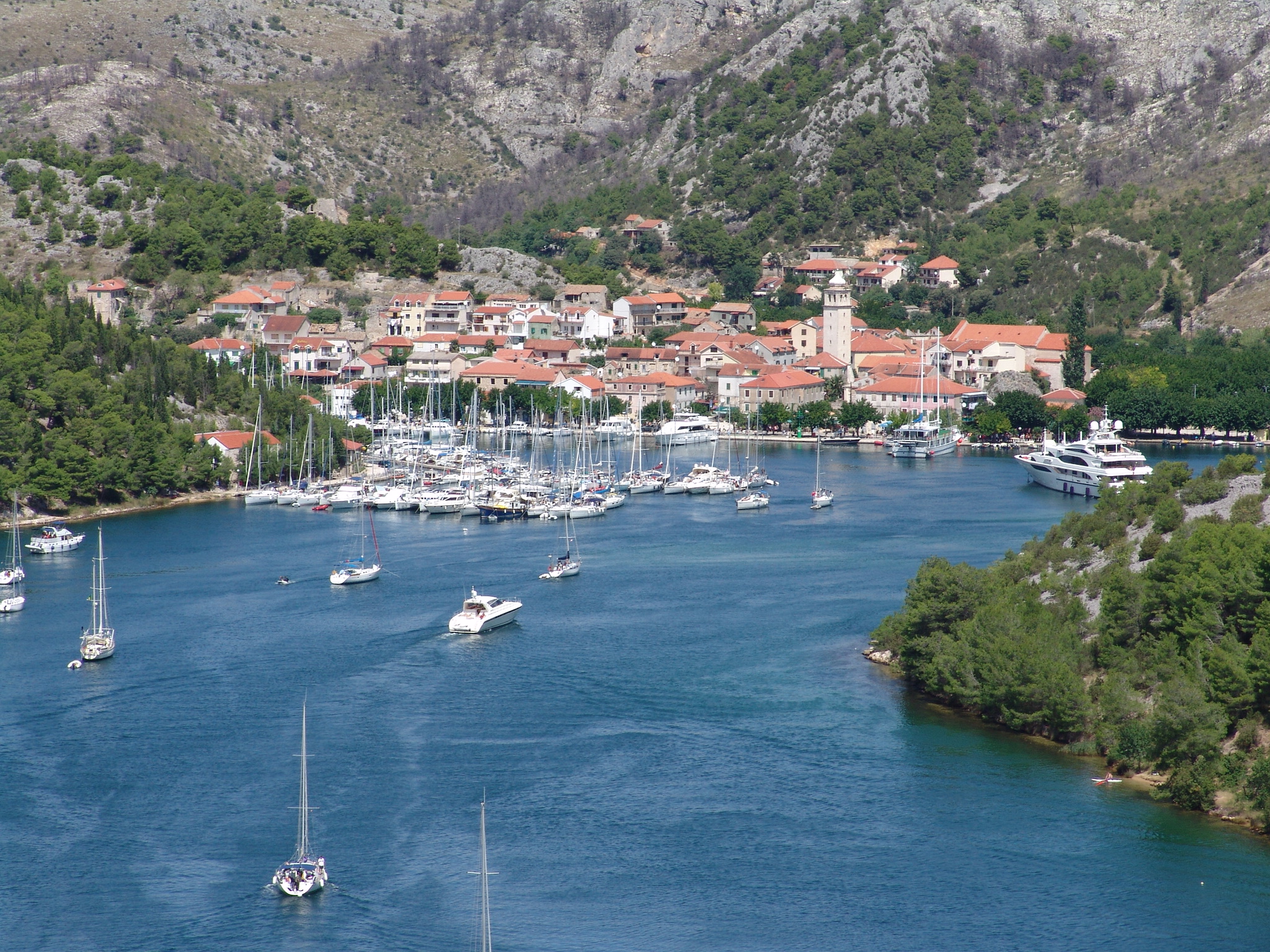 SKRADIN – Take your place as the most important part of that perfection. When speaking about the 6000 year long existence of the Skradin area, historians endowed with wisdom search for the reasons of that continuity in its location and geo-strategic position. History always looks for great and sensible reasons. However, the truth is often much simpler since people and everyday life are smarter than history. Skradin is simply magical in its each and every detail. In the loud morning silence that gets under your skin and the stentorian traditional folk klapa singing that touches your heart. In the peace and quiet of the Visovac monastery and the burst of water drops of the Skradinski Buk waterfall. In each moment of enjoyment of food which has skilfully managed to escape both fridges and freezers which would rob it of its natural aromas and has arrived thoroughly fresh at your table. Such is Skradin, small, picturesque and filled with flavor, found at a point where the river passionately embraces the sea. Such is Skradin, at the border of reality and fantasy. Such is Skradin, perfect, both in past and present. 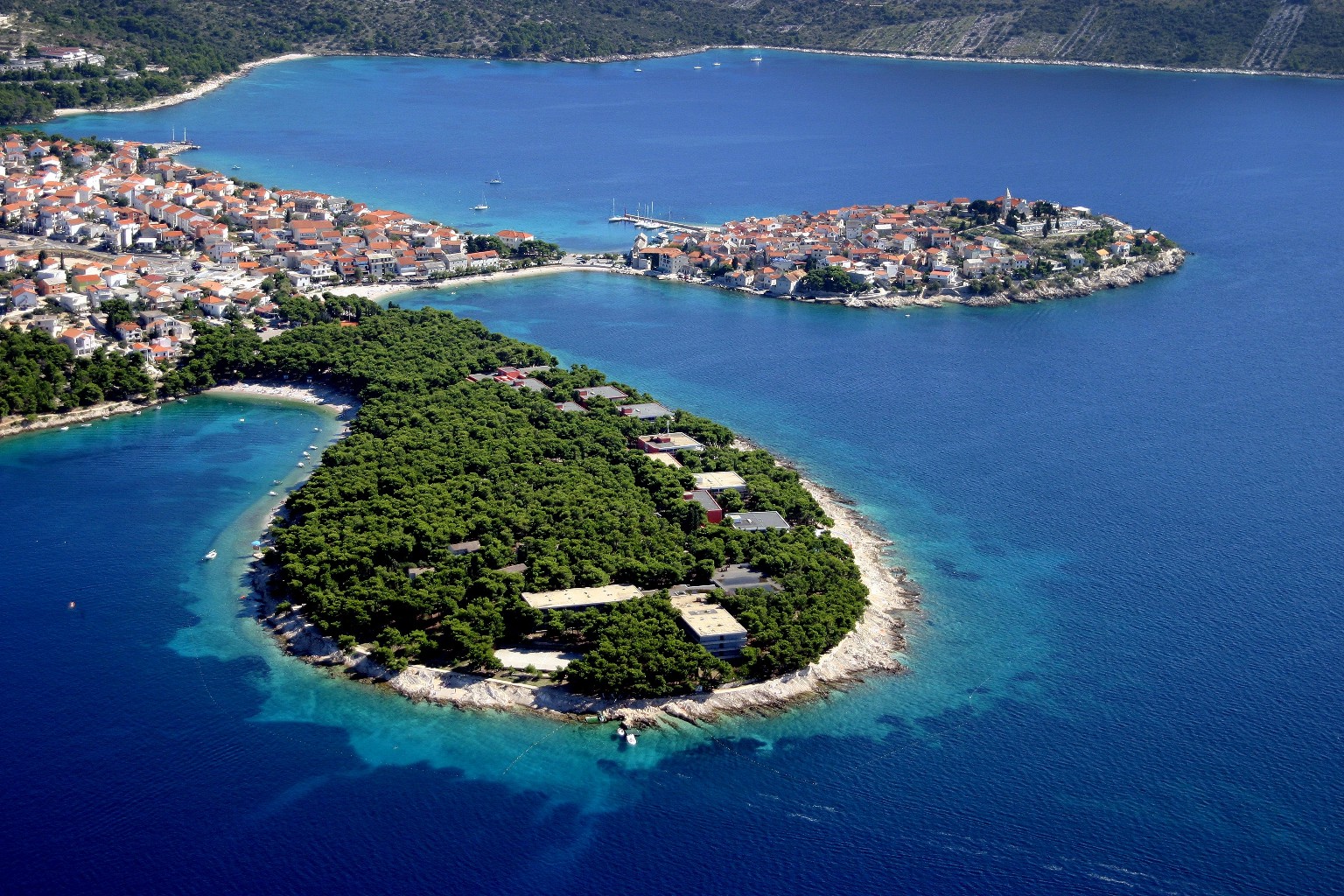 PRIMOŠTEN – a harmony of sun, sea and stone. Upon creating the earth, on the seventh day God ended his work which he had made and he rested on the seventh day from all his work which he had made and as a resting place chose Primošten which he had created for himself for this purpose. So goes the pious story which many believe even to the present day. Welcome to Primošten, a beautiful and irresistible small town, a special gift of nature situated between Šibenik and Split that leaves no one indifferent. Primošten was built on an islet which is connected with the land with a bridge, and it has developed itself into a well-known summer resort which has something for everybody. Primošten is one of the most popular turistic places in Dalmatia with stone houses, churches and many typical tight streets in the old part of the city on the mountainous peninsula which makes a perfect harmony of history and present. 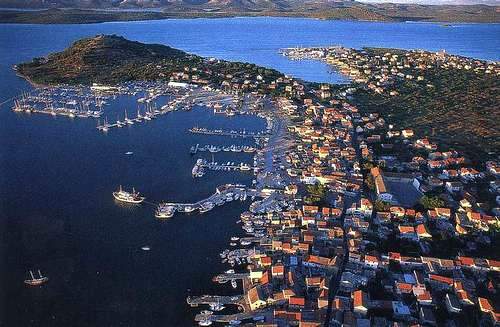 MURTER – Welcome to Murter, that wonderous place ruling over its "overseas colonies" - islands and islets, and, most of all, the pearl of the entire Mediterranean - the Kornati Archipelago. When you say Murter, you are also saying the name of many other islands at the same time. Multiply one island into hundreds and you begin to get the picture of the divine generosity of the landscape in which Nature and the Creator spared no pains. Welcome to Stari Murter (the Old Village), with authentic stone arched alleyways, vernacular and simple houses, stone walls overgrown by climbing plants, and with the modest but inventive features of a valuable architectural ambiance. The island of Murter belongs to the North Dalmatian group of islands, which contains almost 40 % of all Croatian islands and is the most dense archipelago in both the Adriatic and the Mediterranean. Murter is located in the northwest of both the Šibenik archipelago, as well as the Šibenik county. Only 6 meters away from land and connected with it by a bascule bridge, the island is very easy to reach, which makes it even more attractive. Murter offers you beautiful beaches, historical architecture, large fields of olive oil and fig trees. Whether You are searching a destination for family holiday or active holiday, Murter has something special for you – quiet beaches surrounded by pine woods and restaurants with Dalmatian specialties.

ROGOZNICA – Rogoznica, a small Mediterranean tourist destination close to Primosten and 25 km south of Sibenik, is placed in a wide bay, has a post office, doctor's office and stores - a great place to spend a wonderful holiday with friends and family. Rogoznica is frequently visited by boaters because of Frapa marina, considered to be one of the most beautiful and safest in this part of the Adriatic. Rogoznica's many pebble beaches and several rocky beaches are surrounded by pine trees. Rogoznica is traditionally a fishing settlement and visitors can buy recently caught fish. Local festivals, taking place in August - Ribarska noc (Fisherman's Night) and Noc Rogoznice (Rogoznica Night) - attract many visitors including those from Split and Sibenik. Due to its indented coastline and other sports facilities, Rogoznica is perfect for water sports as well as other activities. Secluded beaches await you in numerous inlets in the vicinity of Rogoznica.

ZLARIN - Being the best in the Adriatic, the coral divers from the island of Zlarin have brought fame to the island. On the island there is a souvenir shop where you can buy red corals, the ones that could only be found based on secret underwater maps made by the coral divers of Zlarin. Protected from S and SE winds.

KRAPANJ - Being shallow as a plate, a tiny island of Krapanj is famous for its

sponge divers. It can be walked through 20 minutes while the sea diving it from the coast can be easily swum across by experienced swimmers. Approachable from SW side.

LOGORUN – the island of donkeys - Thanks to the Association for the Protection of Donkeys, Logorun became the first donkey reservation in the world. If you decide to visit the island, take some dried figs with you. The donkeys are tame and very friendly and will enjoy it.

name, with a lovely and well-protected harbor. The warm, sunny and fragrant beaches of these distant islands, with all the beauty of the Mediterranean and their own, await daily excursions of tourists who seek rest from the bustle of everyday life in their many coves and inlets.

KORNATI NATIONAL PARK - Croatians have a legend that when God had finished creating the world he found he had a small collection of white rocks left. He casually tossed them into the water off the coast of Dalmatia, and when he looked again he found he had created perfection in the form of Kornati Islands. In the central Adriatic Sea there is amazing group of islands named Kornati archipelago. Beauty and singularity of the archipelago moved authorities in 1980 to proclaim a bigger part of that area national park. Since then certain modifications of its borders were made, so that nowadays Kornati National Park occupies the area of about 220 km2. There are 89 islands, islets and reefs within the area of Kornati Nationa Park (238 km of the coastline), what makes it the most indented group of islands in the Mediterranean. The land park of Kornati National Park  covers less than ¼ of its total area and the rest is marine system. There are no rivers or streams on the Kornati; it is pure Karst substrate that is cut by fissures and intented by caves and grottoes. The white limestone lying under the coastal shallows is what gives the water their heavenly blue color. Kornati are a sailor's paradise, replete with innumerable quiet coves.

KRKA NATIONAL PARK – In water less crass there is a special phenomenon, river Krka. 72 km long river has found its way through thirsty ground creating a carpet of algae. The lakes of this Karst beauty, River Krka, are peaceful and silent while its numerous cascades are daringly loud and playful. The beauty and diversity of this river resembles a magnificent orchestral symphony under the direction of the Creator himself. River Krka attracts with unique beauty of its great canyon and cascades, beauty of its spring, marvelous plaster creations, waterfalls and lakes, green valleys and woods. For thousands of years Krka has obstinately hollowed out its path through rock and has created its remarkable waterfalls. The peculiar travertine cascades of its waterfalls are extremely rare in the world. In the year 1985 its remarkable beauty was recognized and placed under protection proclaiming the 46 kilometers of the Krka River flow which occupy 111 square kilometers a national park. Man gave his contribution to the value of the river by building sacral monuments and monasteries, forts and power plants leaving monuments of cultural, historical and ethnographic value in the landscape. Beside many smaller cascades Krka also has eight bigger waterfalls; two of them are the most beautiful - Roski slap and Skradinski buk, in the national park. Both are very attractive for visitors and nature admirers for its beauty and magnificent landscapes. Visitors of national park have a possibility to experience unique beauty of nature and plenty cultural monuments in a couple of hours of boat trip on Visovacko jezero Lake. Visovacko jezero is a lake on river Krka in the center of national park and has a small island with Franciscan monastery. It was built in 1445. Rich cultural and historical heritage of the convent is exposed in the museum has original historic documents, rare incunabula and other object of historic, artistic and ethnographic value.