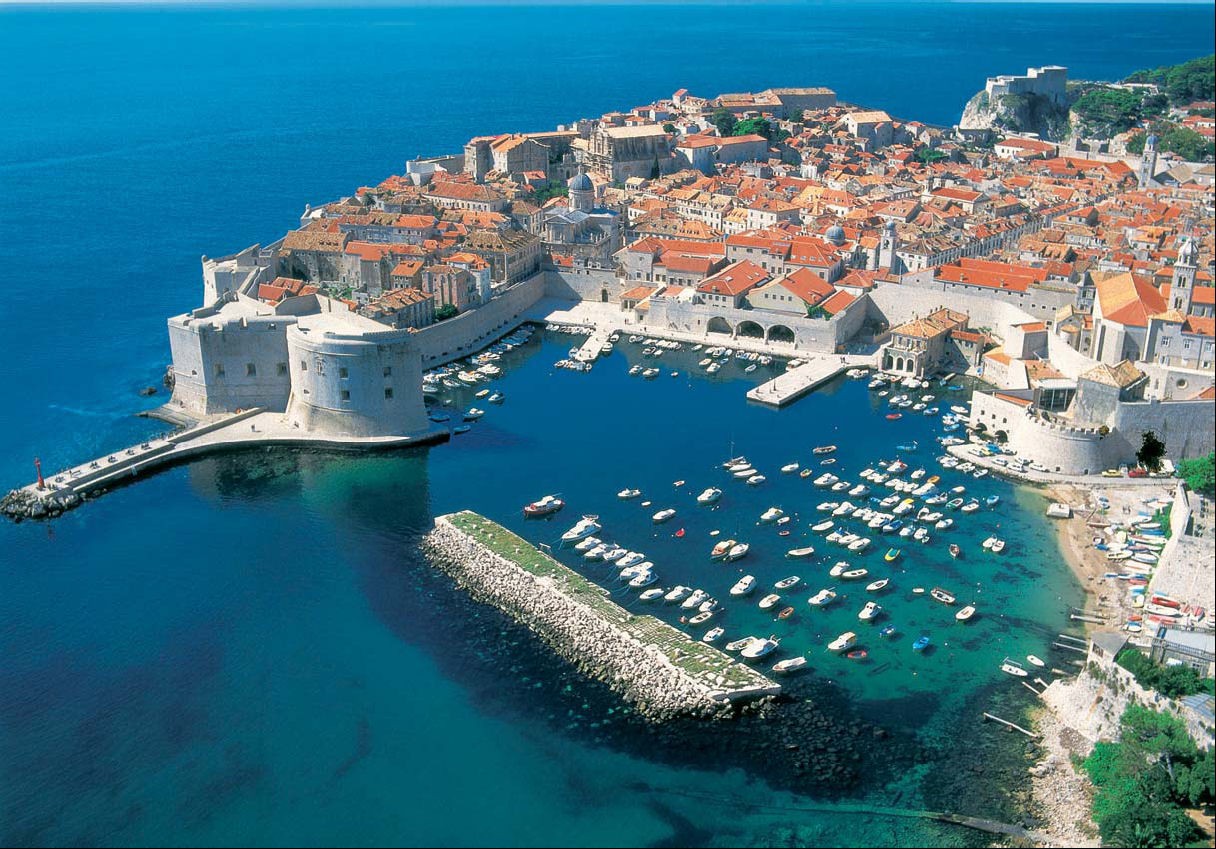 DUBROVNIK - In the far south of the arc that forms Croatian soil, located on the thin coast strip between the high hills and the calmness of the Adriatic sea lies a stone white city: Dubrovnik. It's high walls and bastions stand proud above the clear blue sea boasting to the lush green Lokrum island ranged only hundreds of meters from the walls. Archaic looks and the unpreceded fairytale appearance never leave you while roaming the ancient city, the very reason for Dubrovnik to be a World Heritage site. Throughout it's turbulent history, many sovereign and maritime powers came into conflict in this region. On such a boundary line, the small city of Dubrovnik succeeded in achieving a completely independent form of self-government based on political ingenuity, so that the Dubrovnik Republic remained a neutral, independent state for centuries. Counting only about 30 000 people Dubrovnik is the cultural and social centre of the region, the County of Dubrovnik-Neretva, and Croatian most famous city. The warm, southern climate, the spacious blue sky, the emerald green and dark blue crystal clear sea depths touching the rocky shore and spilling into numerous coves and bays, onto sandy beaches and steep reefs decorated with the lushest Mediterranean and subtropical flora. Under the mild Mediterranean climate, Dubrovnik is bathed in a sea of sun, blossoms and ripe fruits of the orange and lemon trees  growing in many gardens, parks, and city's green surfaces even in the winter months. Throughout centuries Dubrovnik always depended on the sea so it's no surprise that fishing, seamanship, and sea cuisine are an essential part of local culture and come almost like second nature to the local population. 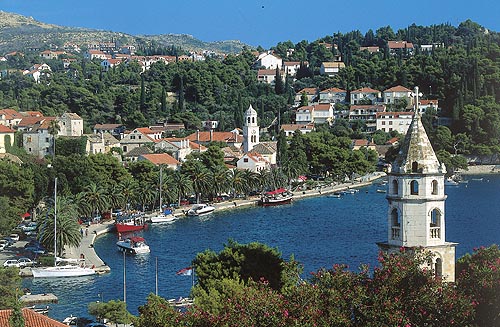 CAVTAT – Ancient remains, Renaissance palaces and villas make up the historical nucleus of Cavtat, a town south of Dubrovnik. For centuries, it's construction was based on the Dubrovnik principles of harmony. Each historical period is marked by the valuable works of some master. The cultural and historical story of it's unique natural beauties can be retold uninterruptedly. It is a town of beautiful beaches and luxury hotels along with a traditional way of life and customs that welcome you. The town was a Greek colony, and later under Roman rules very important settlement in the region. With the invasion of Croats to this area, Dubrovnik became main city and Cavtat was the second most important place. The connection of Cavtat and Dubrovnik goes from days of Dubrovnik Republic and sharing it's fate thence forward. Within the vicinity of Dubrovnik, and in a Mediterranean climate with exuberant vegetation, Cavtat developed into the cultural, social and tourist centre of Konavle. Town of Cavtat offers so much to the visitors: beautiful Mediterranean scenery, crystal clear sea, the rich cultural and historical heritage, its location between the city of Dubrovnik and beautiful Konavle area on the other side; and by all of it represent Cavtat as one of the most attractive destinations on the Adriatic.
DUBROVNIK ISLANDS 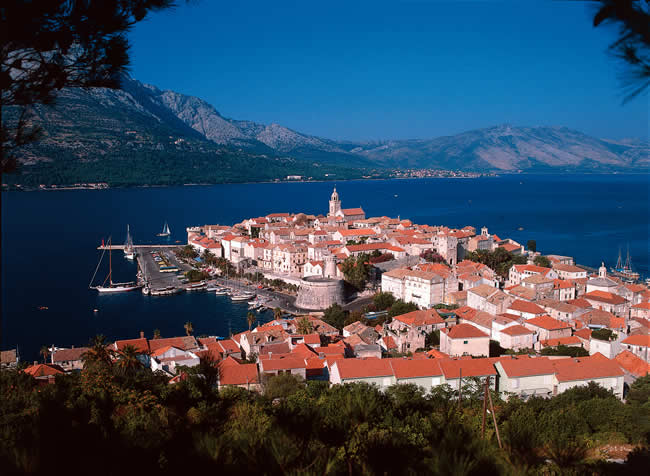 KORČULA – The island Korčula has a very nice location in the Pelješac Channel. The overall island coast is 182 km long with 195 unspoiled bays and promontories and the Korčulan Archipelago boasts 48 islets. It is also known for it's outstanding cultural and historical heritage and a long tradition in seafaring, shipbuilding and stone-masonry. It is the birthplace  of the adventurer and traveller Marco Polo. Tourism has a years-long tradition on the island. Cultural events of "Moreška" and "Kumpanija" have  become world-famous. Moreška has been performed in Korčula since the 15th century and is of Spanish origin. It is a battle between the army of  the White King and the army of the Black King, who fight for the princess abducted by the Black King. After a fierce fight with swords, in seven battle figures and a dramatic dialogue, the White King defeats the Black King and sets the princess free. The fight is accompanied by a battle march performed by a brass band. Moreška is performed every year on the 29th of July, together with the celebration of St. Todor, but also on several occasions during the tourist season. Gastronomic offer includes famous fish specialities and exquisite, top-class local wines ( Posip, Rukatac, Grk, Plavac ), due to which Korcula is also called "the island of wines". The local cuisine is also famous for traditional cakes and sweets, such as "cukarini", "krostule" and "prikle". 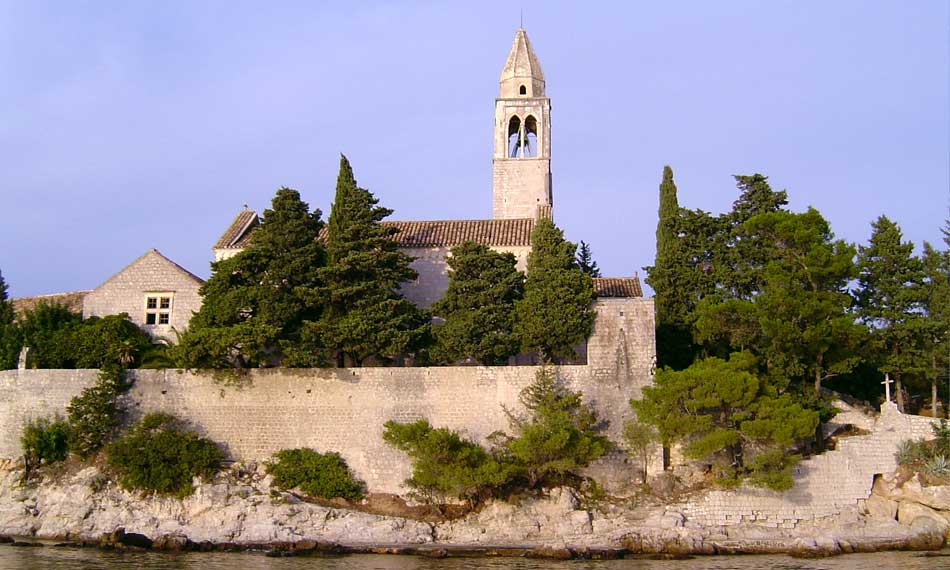 ELAFIT ISLANDS – On the western side of Dubrovnik, in it's immediate surroundings there is the finest Dubrovnik archipelago called Elaphite, closely bound to Dubrovnik and it's entire past. The islands are very beautiful, and they seem to be constant guardians of the sea and coast; they have always been the home of the brave captains and sailors of the Dubrovnik Republic and the present Dubrovnik. The islands are called Kolocep, Lopud, Sipan, Jakljan and Olip. The island Koločep is a green island with 100 year old pine groves, carol trees, olive groves, with gardens full of orange and lemon tress, fine beaches, all of the island a large park. It is one of the favourite excursion spots of the citizens of Dubrovnik. The island of Lopud is characterized by flourishing Mediterranean, subtropic vegetation, marvellous parks and beaches, gardens with orange and lemon trees; it is one of the best developed touristic islands in the Dubrovnik area. Lopud had 30 churches in the 16th century, a great number of summer residences, several monasteries and many more inhabitants than today. The largest of the Elaphite islands in the archipelago Šipan, with quiet bays, beaches, green cypress groves, lemon and orange trees, numerous old buildings, small churches, summer residences of the noblemen and common citizens spread all over the grove-covered hills, with a long history full of stories and legends, it is one of the jewels of the Dubrovnik area. The island Jakljan is a small island, covered with forests, in the immediate surroundings of Šipan.
PELJEŠAC PENINSULA – Pelješac is the largest peninsula in Dalmatia and if we observe it's history it becomes clear that all major civilizations left their trace in this corner of the Mediterranean, and an authentic culture on this peninsula developed due to these influences. Mljet channel is south of Peljesac, and Peljesac channel on the western side. Through history it was called The Point of Ston. It is the second largest Peninsula in the Adriatic after the peninsula of Istria abounding in natural bays, mostly covered with woods, with a coast full of beaches, reefs, bays and fjords. Peljesac is 65 km long and is 348 km2 in surface. It is connected with mainland by 1450 m narrow Stonska Prevlaka. This peace of land divides Mali Ston and Ston channels, which are bays in fact but called channels. Prevlaka is mostly sandy, probably created by sea sand sedimentation , which means that Peljesac used to be an island. There are fertile valleys and rocky hills in Peljesac, the highest of them is St. Ilija, 961 m high. Peljesac is surrounded by numerous islands and islets. Most of them are north, in the bay of ports Drace and Brijesta. The climate is mild Mediterranean. It belongs to Dubrovacko-neretvanska county, with local centres in Orebic, Ston, Trpanj and Janjina. About 9000 people inhabit the peninsula. Main industries are olive and wine growing, fishing and tourism. There is one main road connecting it to the mainland. Ferries are available in Trpanj - Ploce, Orebic - Korcula, Prapratno - Mljet.
NATIONAL PARKS IN DUBROVNIK REGION
MLJET NATIONAL PARK - ...the most beautiful and the greenest of all Adriatic's islands, one of the most attractive and most interesting cultural-historical pearls of Mediterrenian year by year is getting more popular among tourists from all over the world. Mljet is one of the favourite places visited by couples in love, nature and history lovers, artists and meny others... For most people, Mljet is an island lost in the open sea, and the island is indeed hard to reach. But do not let this landscape - mentioned in the stories about Odyssey and St. Paul, as well as Benedictine monks and the Mediterranean Seal - remain a secret for you. 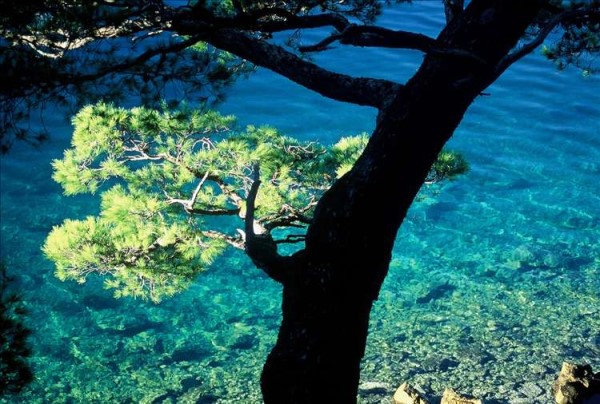 Mljet is an elongated island, with an average width of 3 km, 37 km long. It is an Island of great diversity and contrast, and "Mljet" National Park covers his northwestern part with an area of 5.375 ha of protected land and surrounding sea. This area was proclaimed as national park and represents the first institutionalized attempt to protect an original ecosystem in the Adriatic. Mljet is also well known for it's two salted lakes - Veliko and Malo Jezero that are located at the north end of the island. On small island in the middle of Veliko Jezero lake, there is old Benedictine monastery. Today, Mljet island is characterized by stable human settlement living in 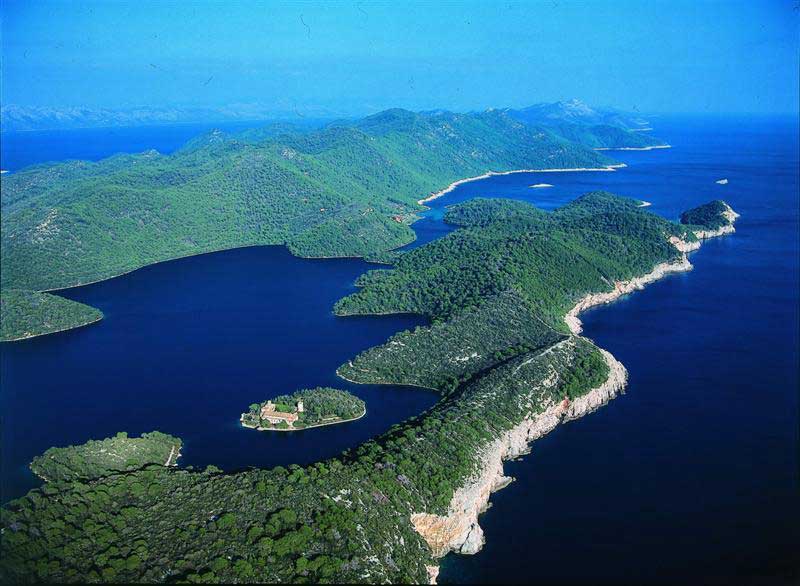 complete harmony with nature. The rich vegetation of the island, especially in the area of the national Park, explains why Mljet is also known as the Green Island. Besides the forests, there are other areas of biological interest: sand dunes on the coast, high, steep coastal cliffs, as well as cliffs further inland, and, finally, the vegetation on the reefs. Mljet's fauna is particularly friendly because there are no poisonous snakes (e.g. horned viper) thanks to the introduction of the Indian Mongoose, which wiped them out. This island is well known for its white and red wine, olives and goat's cheese. Today's population mainly live from agriculture growing grapes and olives, and tourism that enabled the development of new villages along the coast.

LASTOVO NATURE PARK -  Amidst the string of silver islands, over the Adriatic sea, stands the wooded Lastovo, amazingly beautiful island which from the outside seems a forgotten companion of history, while there, in the shadow of high olive-trees, life has flourished since the pre-Hellenic times. Lastovo is a beautiful island situated in south Croatia, in Dalmatia region. It attracts numerous tourists with it’s natural beauties and crystal, clean sea. The Romans called it The Imperial Island, the wonderful buildings of white stone speak about it’s past. Lastovo has preserved the folk tradition of Carnival - the Shrovetide - by which the me of Lastovo celebrate the help of St George in their defence against the pirates. The green forests and 46  cultivated valleys (mostly vineyards and olive trees) are spread over its 56 km². Lastovo island is surrounded by 46 smaller islands and cliffs with untouched nature and numerous bays. Lastovo is among ten Mediterranean islands that have the most  preserved original value of untouched nature and beauty. The island possesses all the  basic characteristic of the Mediterranean climate; mild, humid winters and warm, long and dry summers. Lastovo is famous for it’s wine, once enjoyed by the Roman emperors, and since the sea surrounding the island is the richest fishing area in the Adriatic, Lastovo truly offers a superb gastronomic experience.
Web dizajn i izrada stranica - trama.hr